To those of you who are still listening,

I made a choice when I first started my new job, a choice that many of you would have made before. A choice that challenges your morals and plays with your conscience, but ultimately could be the key to my workplace happiness.

Of course, I’m talking about “the disabled toilet”.

For some a safe haven free from judgemental society, for others they may have no other choice, for me, well, it’s a pleasure.

I work in an office with around 25 members of staff none of which have a disability and yet when it comes to the lavatory I am presented with 2 choices: Do I risk using the one and only cubical in the male toilet, squeeze by the poorly designed door and feel my way around the seat like a bad French mime act as some bright spark thought light sensors would be the best choice? Further to that – my shoes and pulled down trousers are clearly visible to anyone who enters instantly being able to identify who I am (and question what I have eaten). Do I just close my eyes and think of England, praying someone doesn’t come in and smell the unholy scent of last nights Chinese? Or do I pull my trousers up and pluck the forbidden fruit that is “the disabled toilet”?

When I first entered I felt like Charlie Bucket when Willy Wonka first opened the doors to the chocolate factory (no, this isn’t some kind of sick euphemism). It was pure joy. I was almost certain none other had made the bold choice I had made before that fateful day. It was well lit, spacious, had heating pipes all around, and a comforting whirl from an actual extractor fan. I couldn’t believe my luck.

Then something happened that I hadn’t prepared for.

When I left the safety and comfort of my new abode, I walked around the corner straight into my manager. “What’s down there?” he asked. He knew full bloody well what was down there! He just wanted to hear me say it! I left with caution in my step and couldn’t wait to let the boys opposite me know of the secret garden. They all said that they have never even considered it (I knew full bloody well they had). But agreed to visit and see what the fuss is about next time nature calls.

It would be safe to say that word got out. I would say between 10-15 people (including the superior that caught me) use the worst kept secret of 2018 on a daily basis. The floor no longer sparkles, people are just straight pissing all over the seat. What was once my perfect secret was now as good as Glastonbury portaloos. 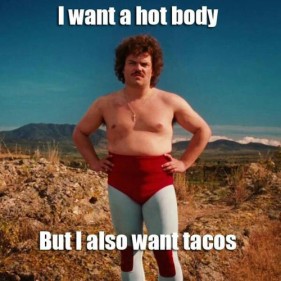 To those of you who are still listening,

It’s around March each year that I look at myself in the mirror and just sigh.

I’m one of those people who go to bed each night with overwhelming motivation to “just do 10 press-ups each morning to get me back on track”. Then each morning, like clockwork, I wake up and have that silent agreement with myself to just not mention it and continue with my bacon sandwich.

I read that you get this bedtime motivation because your brain knows damn well it’s not going to happen right now and can deal with it in the morning, where it also won’t happen. Clever brain.

So to spite myself I went ahead and joined the gym.

A friend of mine was incredibly excited about this news, as this means he now has a young padawan to enforce techniques and increase ego upon. I was happy to oblige as I truly had no idea what I was doing.

It turns out that it’s pretty easy. It’s a lot of looking at your phone and flexing in the mirror mainly. The key is to have as many conversations with others about “what they bench” without actually having to lift anything at all. Then before you know it, it’s been a “great sesh” and home you go where again you have that silent agreement with yourself to just not mention the fact that you are wasting your money and not actually losing any weight.

You’re just left to wallow in what is the empty satisfaction that you are at least a member of a gym and even have the card to prove it!

For those of you who are still listening,

People tend to go through their day to day life using expressions they have picked up along their way and use them without asking any questions.

Like many other things, this has started to annoy me. It baffles me why anyone would use idioms from 90 years ago without batting an eyelash ( I mean where did that one come from? Do eyelashes bat?). Below are a few favorites that I regularly encounter, my views on them, and hopefully some info on where they originate from.

This is up there, how is this still being used today? You can thank Andrew Marvell who said this back in 1672. That’s a full 346 years of idiots using this idiom which doesn’t fill me with joy as a starting point.

In a previous job we had a young apprentice who we sent off on errands to find impossible items, elbow grease being one of them. Along with indicator fluid, glass nails, and a VERY long weight, it gave us great enjoyment to see the sourpusses face upon his return.

It would seem in the late 19th century Americans LOVED pie.

So much so that they started to include it in their daily lingual. Everyone wanted a slice of the American pie, they had their fingers in it, and it made them feel upper crust.

They were even promised pie in the sky as a way to endure life. Like a promise of heavenly reward for baring their own existence. In my head, I just see an American asking a priest at Sunday mass “But will there be pie?”

This takes the biscuit. Many of you (including myself) would think that it would be used after saying something rude. Note; this normally is said in English, and then accompanied by “pardon my french” which is annoying enough.

Wikipedia states that the phrase “derives from a literal usage of the exclamation. In the 19th century, when English people used French expressions in conversation they often apologised for it – presumably because many of their listeners (then as now) wouldn’t be familiar with the language”.

It then got a bit racist. Coming into the 20th century it was then used to attach anything rude, or foul, with the French. For example; “taking French leave” means to leave the party without saying goodbye. “French kissing” implies that they would have contracted herpes from THAT kind of kiss. And a “French letter” is simply just a condom.

I truly hope I have shed some light on some of the idioms used today. Please try to refrain from using them. Although, I can appreciate it’s rather hard to do.

To those of you who are listening,

I really don’t know where such strong opinions came from regarding this, but my main pet hate is a prick-dog. You know the type – the kind of dog that just knows it is above everyone – the type that struts around with an air of “fuck you” about it.

I know that it’s is down to the owner, but when it’s your girlfriend’s at the time – it’s a lot safer and easier to just dislike the dog.

With that being said – this is Myrtle (I apologise for the name). Mum named her and said “I couldn’t give two shits about Harry Potter! I like the name!”

She is 7 weeks old, and has constantly soggy ears due to them being dipped in her water bowl.

I could be cured of my dog judgement.

To those of you who are listening,

I got stuck in the abyss that is a tedious stop and chat today. I was having a cigarette and caught myself subconsciously just blowing smoke into their face. It was quickly countered by a forced cough from the stop and chatterer. I apologised and blew the smoke forcefully to the side. Unfortunately, this just resulted in it just catching the wind and going directly back into their face anyway. I got a look. But then again I wonder if they just had smoke in their eye.

One time, I went into a shop to buy some cigarettes and asked the lady behind the counter “If possible, could I have your least disgusting cigarette packaging please”. She looked at them for what seemed to be an eternity, battling all her moral compasses as she soon realised there really was no right answer. She turned around and presented me with some packaging of a dying child with a respirator on. She said, “the others were disgusting to look at”. I didn’t ask questions. I apologised and promised I would never ask this again.